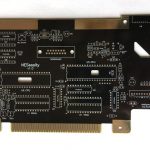 Low_budget, creator of the now-discontinued NES clone the Super 8-bit, just revealed his latest project: a complete replacement for the front-loading NES motherboard named the NESessity Designed to fit perfectly inside of an original NES case, the NESessity board’s circuit is closely based on the Super 8-bit layout (Low_budget recently released its full schematics) but the […]