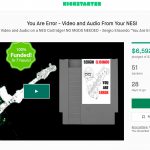 A Kickstarter campaign for a music video album, Sergio Elisondo‘s You Are Error, was just funded in an impressive seven hours. But this isn’t just any album; these videos are being released on an actual NES cartridge! This is not only quite the technical feat (the cart plays digital video and audio directly through a […]