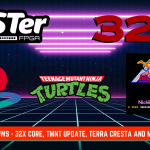 32x Core A new Sega 32x core has been released. All you have to do is run your update or update all script to obtain it. The 32x was an add-on for the Sega Genesis and Megadrive that upgraded it’s graphics and sound capabilities. It was developed by srg320.  Obtain the 32x core by […]