History of the CRT Display 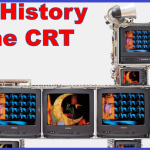 Cathode Ray Tube technology dates back to the mid 19th century starting with the invention of the sealed glass vacuum tube.  This sealed vacuum tube lead to the discovery of the electron by the late 19th century.  These tubes were developed into the most influential screen display tech of the 20th century, the television.  To […]