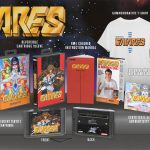 Retro-Bit has just announced they’re opening pre-orders from now until December 19th on an official re-print of the Genesis shmup Gaiares.  This release includes a clear cartridge shell, that lets you see right into the PCB designed by René from db Electronics – Which of course will have properly beveled edges and is 100% safe […]