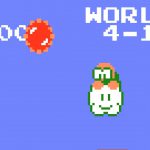 GoldS, an admin and writer at video game research wiki The Cutting Room Floor, has released a patch for Super Mario Bros. (NES) that fixes a bug in the code that governs Lakitu’s behaviour when throwing spiny eggs: “The Spiny eggs are thrown by Lakitu in a simple way, with no horizontal movement whatsoever. However, this […]