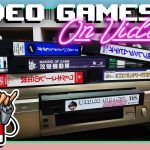 In the 80s, 90s and even early 2000s in Japan, thousands of video tapes about video games were produced either to sell or rent in shops, give away as promotional items or advertise new games and products at retailers.  Video Games On Video is a new series from Import Gaming FTW that aims to take […]