ZX Spectrum ‘Next’ Kickstarter Raises Over A Million Dollars 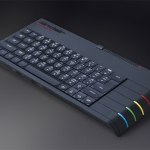 The The ZX Spectrum Next has just launched it’s second kickstarter, which has already raised over a million dollars to make it happen!  After the success of the original Kickstarter, interest in the console grew and now the team is back with a second run, due to ship next year:  https://www.kickstarter.com/projects/spectrumnext/zx-spectrum-next-issue-2 The ZX Spectrum Next “Issue 2” […]