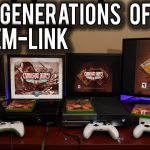 Modern Vintage Gamer has just posted a video demoing the original Xbox’s System Link feature working with the game Crimson Skies.  He was able to run an original Xbox alongside an Xbox 360, Xbox One and Xbox Series X also running the game, but in their backwards-compatibility modes.  With all connected to the wired LAN, […]