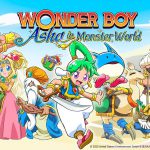 A new Wonder Boy game was just announced, called Wonder Boy: Asha in Monster World.  It’s release is planned for early 2021, on both the PS4 and Switch:  https://wonderboy.inin.games/ The game is essentially the next in series after 1994’s Wonder Boy IV and it appears the original team is coming back to make it:  The […]