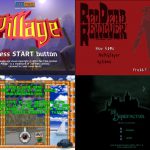 A handful of previously unreleased demo’s and games for the PlayStation 2 have just been posted, after being recovered from a formatted hard drive recently found. Of the games posted, Snood and The Benefactor seem to be demo’s of games that were never released on the PS2.  Pillage was actually released a year after this […]