The Making Of Goldeneye 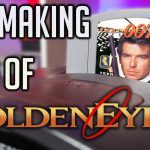 Wrestling With Gaming has just released a new documentary chronicling the legendary N64 game Goldeneye.  The video dug into the making of the game, as well as the team involved.  There’s a bunch of cool behind-the-scenes tidbits, but my favorite was definitely the story about when the multiplayer mode was implemented. Also the visuals in […]