The Legend of Zelda – ‘A Link To The Proto’ 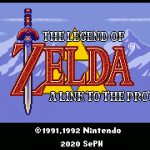 Romhacker SePH has just posted a patch for SNES Zelda that’s being called ‘A Link To The Proto’.  It’s an interesting hack, as it’s not an official, existing prototype release;  Its actually a compellation of assets found in different prototype versions that have been previously leaked.  The goal is to give a glimpse of what […]