The Cult Of Remute – Now Available 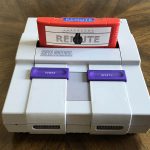 Stone Age Gamer now has stock of the awesome new album from Remute, titled The Cult Of Remute:  https://bit.ly/cultofremute As previously reported when it was announced, the all-original album from Remute is made as a real SNES game and the sounds all all played through the SNES’ sound chips.  To be clear, this isn’t a “passthrough” […]