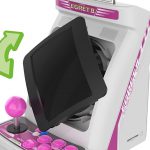 Taito has just announced a “mini” version of their Egret II arcade cabinet that features a 5″, 4:3 screen that pops out and rotates between horizontal and vertical orientation.  It also comes with an SD card slot that allows you to add more games – A feature lacking from all the other mini consoles (without […]