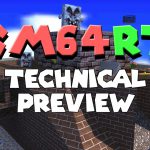 Twitter user @DarioSamo has recently released a mod for the PC port of Super Mario 64 called SM64RT (Super Mario 64 Ray Tracing). What this does is that it completely overhauls how the game looks, and how it’s rendered. Because it’s using something called path tracing. What most games that support ray tracing do […]