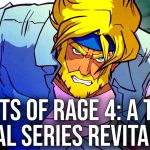 John Linneman recently uploaded a series of videos dedicated to the newly released Streets Of Rage 4.  The first (above) starts out as a series retrospective and goes over all the things that made the first three the classics they’ve become.  For anyone unfamiliar with the series, or someone that wants a “refresher course”, this […]