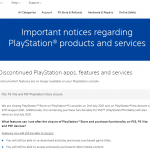 Sony Computer Entertainment has officially announced the closure of the online PlayStation Store fronts for PlayStation 3, Portable (PSP), and Vita devices.  In this release, Sony gave a break down in the form of an FAQ (Frequently Asked Questions) of what services would and would not be available and what users could expect going forward […]