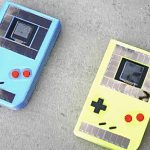 A group of computer scientists from Northwestern University in Illinois and the Delft University of Technology in the Netherlands have built a custom Game Boy that’s both solar and self-powered.  The handheld uses solar panels on the front to generate power, as well as using energy generated when the buttons themselves are pressed. Another interesting aspect […]