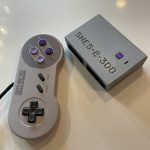 Engineer Robert Dale Smith has just released a controller adapter that accepts Super Nintendo/Super Famicom controllers and converts their signal for use on a 3DO console; he’s calling it the SNES-2-3DO. Before getting into the adapter itself, I should first mention that there were at least one functionally similar 3rd party adapter (e.g 3D-Zero Super […]