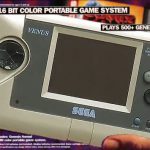 Sega has just posted a video going over the history of it’s consoles and for what I believe is the first time ever, they showed a prototype of the Nomad, called the “Venus”.  While the video itself is interesting, I don’t think anything else new or revealing was included.  The video does confirm the fact that […]