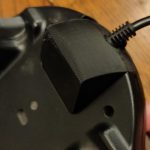 The Sega Saturn “3D Controller” was the first official Sega controller to offer an analog stick.  It was originally released alongside NIGHTS into Dreams and was also compatible with a number of other Saturn games, including some racing games where the analog controls came in handy. One odd thing about this controller is the cable […]