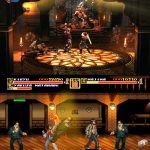 Sega are continuing their 60th anniversary celebrations this month by releasing two interesting games on Steam for a very limited time. The first is a cancelled “Golden Axed” prototype.  This will be available on the 18th of October for around 24 hours only: https://store.steampowered.com/app/1368460/Golden_Axed_A_Cancelled_Prototype/ The second is titled “Streets Of Kamurocho”, and looks to be […]