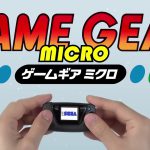 Sega has announced that to celebrate their 60th anniversary, they’ll be launching the Game Gear Micro:  Four mini Game Gear’s with a 1.15″ screen.  They’ll cost around $45 each and launch in October in Japan. I (Bob) have mixed feelings about this.  On one hand, I’ve always viewed these “classic” consoles as expensive novelty “toys” […]