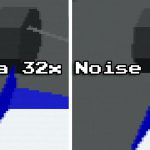 A few months ago, Kevtris proposed that part of the video noise introduced by the 32x’s video layer was caused by it’s switching power supply.  He suggested replacing two capacitors with different values to see if the noise went away. I wanted to put this to the test on a 32x I recently received and […]