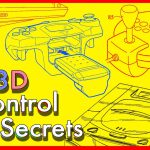 Jenovi’s Retro Impressions just posted a follow-up video to one of the most interesting aspects of his Analog Controller Video:  The planned expansion modules for the Sega 3D control pad. Some of the expansions such as motion control units planned were a bit ambitious for the time, while other things like memory card support made […]