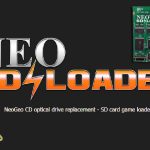 Furrtek has just released a firmware update, as well as the open source files for the Neo SD Loader; An optical drive emulator for the Neo Geo CD.  When originally announced, Furrtek said he would open source the entire project after some development costs were recouped and now (as usual) he’s kept his word.  Along […]