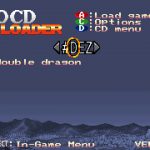 Furrtek has just released a new firmware for the Neo SD optical drive emulator.  There’s some significant changes in this release, with a 25% loading speed increase and the ability to load custom backgrounds to the menu:  http://furrtek.free.fr/sdloader/support/firmware.htm Alex aka ArcadeTV has already created some custom menu backgrounds for it and they’re equally as impressive as […]