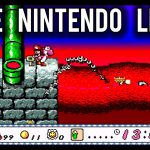 It looks like there was another leak of Nintendo source code and this time the full source for a few of the most iconic Super Nintendo games were part of the release.  There were also prototypes of games released, some with alternative music that’s never been heard before and I’ve linked to a few exampled […]