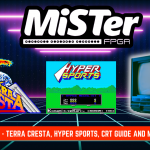 Jotego Updates Get ready for some button mashing because Jotego has released a beta core for Hyper Sports to his Patreon subscribers. Developed by Konami, Hyper Sports was an Olympic sports arcade game from 1984. Players would compete in different events like swimming, Skeet shooting, archery and more. Jotego also fixed a bug in Forgotten […]