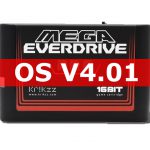 Krikzz has just released an updated firmware for the Mega Everdrive Pro.  This update fixes compatibility issues with the redump pack, that would previously not allow you to load games with multiple bin’s in the folder.  In my opinion, this was a crucial requirement, as without it, some games would require manual patching, rather than […]