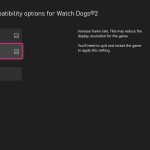 Microsoft has been rolling out the March 2021 update for the Xbox Series S/X and included is an interesting feature:  The ability to toggle HDR and/or FPS boot on backward-compatible games.  Not every game will support these features and the toggle option is focused on modern games, however some original Xbox games do have an […]