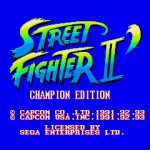 hiddenpalace.org has just uncovered a pretty important, previously lost piece of history:  The original, unreleased port of Street Fighter II Champion Edition for the Sega Genesis / Mega Drive:  https://hiddenpalace.org/News/The_Lost_Street_Fighter_II:_Champion_Edition_for_Sega_Mega_Drive You might ask: “But I already own Champion Edition for the Genesis…how could it be ‘lost’???” What was released to the public was actually the “Special […]