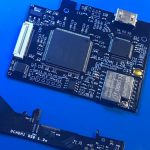 A minor firmware update was just released for the DCDigital;  The Sega Dreamcast HDMI mod from Dan and Christof.  As usual, updating the firmware is as simple as connecting the console to your wifi network, then downloading and installing the update right from the OSD! The full changelist is as follows: Fixed: LED pattern when […]