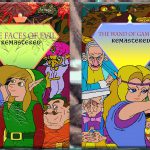 The infamous 1993 CDi Zelda games “The Faces of Evil” and “The Wand of Gamelon” have just been remade and are playable on Windows and Linux.  According to the developer: “Features include widescreen mode, remastered mode for less frustrating play, subtitles, touched up sprites, unlockables, and more. They are not 1:1 remakes, with many differences, […]