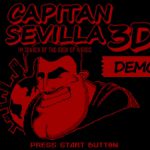 Team VUEngine has just released a demo ROM of a new side-scrolling adventure game for the Virtual Boy, called Capitán Sevilla 3D.  It’s confirmed working on real hardware via the HyperFlash32 and they have an eInk label created for it.  Unfortunately, this demo is most likely the final revision you’ll see from Team VUEngine, however […]