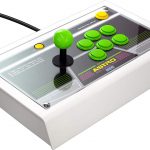 Yesterday, when Sega announced the final game list for the Astro City Mini, they also opened pre-orders on a 6-button arcade stick that will ship on December 17th for around $120.  Link below. According to Sega, the goal of the stick was to reproduce the same feel of the arcade cabinet, but in joystick form.  […]