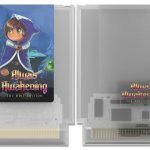 Eldin PIxels, the team behind the NES-style game ‘Alwa’s Awakening’ has just completed porting the game to run on original NES hardware!  Pre-orders will be open from now until October 17th and there will be two versions:  A collectors edition released with a functional NES cartridge manufactured by RetroBit, as well as a digital-only release […]