A Beta of Dinosaur Planet Has Been Released 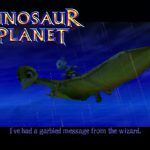 On February 20th, 2021, the Twitter account Forest of Illusion released a a beta of the game Dinosaur Planet for the N64 which eventually became Starfox Adventures released for the GameCube. The ROM was found on a CD in the possession of a Swedish collector with a file date of December 1st 2000. Today we […]