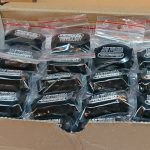 Tony, the creator of the aluminium Virtual Boy medallions has just completed one more run of production.  He originally only planned on making one batch, but the demand was pretty overwhelming and only a fraction of people who wanted one were able to purchase.  Not wanting to let people down, he’s made a second run […]